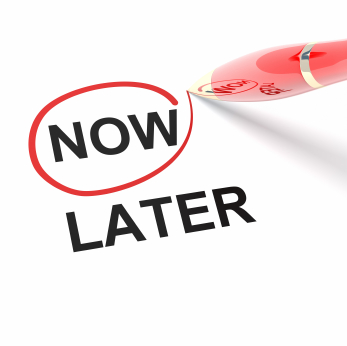 Everyone has one form of procrastination or another. The worst place for procrastination to happen is easily the workplace. With several people depending on one person to get something done, procrastination slows down the process as a whole and delays your company’s ability to make good on certain deliverables in the promised amount of time that you’ve set aside for your project.

If procrastination seems to be running rampant in your office, here are 10 ways to overcome the issue before it becomes a problem in your workplace.

Deadlines for each step in your project won’t stop procrastination, but it definitely gives it less opportunity for it to happen.

The more your company can do in a shorter amount of time, the more money that you can tack onto your bottom line. Reward your employees for finishing work ahead of time.

Putting one employee in charge of a project can easily result in procrastination. Try teaming up 2 or more employees for a certain task and you’ll find that employees feel obligated to finish their job faster.

Promote Those Who Work Faster

Make it clear that employees are promoted because of their ability to work fast. It will become quite clear that procrastination is not tolerated in your workplace.

There’s nothing that says you can’t hold back pay for an employee’s procrastination. Put out a clear warning that procrastination on a task will result in payment being withheld.

If the assembly line process doesn’t work, consider making the entire team work on the project, so that no one has the opportunity to hold off on a task.

Make it Clear What Procrastination Does

Sometimes, employees don’t realize how much they slow a project down. Use hard numbers to communicate the problem that it causes down the chain of command.

Hold a meeting every morning with the entire team. Make sure to ask those who are procrastinating on the spot. The same answer won’t be tolerated for very long.

Give Your Employees More Value to Their Task

Procrastination often occurs because employees don’t feel their role is important. Give them tasks with varied levels of importants to make them feel like they have more value to the team.

Put Out a Help Wanted Ad

Putting out a “Now Hiring” ad for a similar position as the one who is procrastinating is certainly a good warning sign that one’s job might be in danger. Discourage procrastination with the threat of replacement. Only use this as a last resort, as it could backfire and you could see the procrastinators walk.

Towanna B. Freeman is the founder of Black Life Coaches Network, the leading life coaching site that connects African-Americans who are seeking valuable life changing advice and strategies with practitioners who can deliver just that.