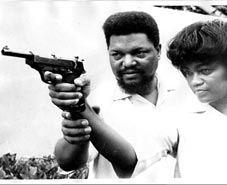 Stefan B. Tahmassebi of the George Mason Civil Rights Law Journal indicated that the first recorded law restricting African Americans from owning guns was in Virginia in 1640. A century later, the 27 words of the 2nd Amendment made it clear that the people have the right to keep and bear arms.  However, those 27 words are subject to interpretation.

After the Civil War, legislators of the South adopted Black Codes.  Black Codes represented a series of comprehensive regulations that made the bearing or owning firearms by African Americans illegal. The Black codes essentially made African Americans vulnerable to any attacks.  Justice Buford of the Florida Supreme Court justified two original Acts restricting African American laborers from owning guns in 1893 and also in an amended version in 1901.  Despite the pervasive gun restriction laws, African American inventor Clarence Greg received a patent for an early version of a machine gun in 1918.

The United States Congress overrode the Black Codes with the passage of the Civil Rights Act and the 14th Amendment.  The National Rifle Association (NRA) set up charters throughout the South to help train African American communities to defend themselves.  There should have been momentum for African Americans to become more integrated in the American gun culture.  What slowed down the momentum?  Those of us that lived in the cities in the late 1960’s can remember our parents telling us not to be in the front or back of the house when the clock strikes midnight on New Year’s Eve.  There was always fear of people firing a gun to bring in the New Year.  Many people were killed by the New Year’s Eve stray bullets.  We also tended to associate guns with crime and were told that guns were a bad thing.

Today, it is speculated that there are approximately 300 million guns in the United States.  The NRA indicates that their membership is approximately 5 million. When you think of the American gun culture, you have imagery of pickup trucks, hunting and primarily White Americans.  The imagery is further confirmed by survivalists and the membership profile of the prominent NRA organization.   The most popular magazine catering to the gun culture, “Guns and Ammo”, usually has not featured any African Americans contributors nor has any been displayed in advertising.   Does the NRA see an opportunity to expand their membership and target the 30 million African Americans in this country?

The NRA has taken their first step to tap into this market by using 29 year old African American, Colion Noir as one of their newest pitch men.  Colion has endured criticism from vocal members of the African American community.  Colion responded in an interview in the LA Times, “Calling me an Uncle Tom simply because I am into firearms, it doesn’t make sense. My entire identity as a black guy is based on my ownership of guns? Really?” he said. “Some of the most influential black individuals have advocated the use of firearms, so how come when I do it, I’m vilified? Take a look at the Black Panthers, MLK and Malcolm X.”  Does Colion deserve the criticism?

Gwainevere Catchings Hess, President of the Black Women’s Agenda, Inc. points out that, “In 2009, black males ages 15-19 where eight times more likely as white males the same age, and 2.5 times as likely as their Hispanic peers to be killed in a gun homicide.”   The initial reaction could be perceived that Colion could be adding more gasoline to an existing wide spread problem.  Do these statistics and generational stereotypes create a fear of African Americans with guns in the majority? Could that be the reason for not targeting the African American market?  Or is the gun industry using the statistics and generational stereotypes to exploit fears to generate revenue?  The NRA could be attempting to introduce a new dimension of African American thinking in regards to firearms.

Others have indicated that the African American gun culture is reflected in today’s urban rap music and is associated with gang violence.  With the demographics of the country changing, maybe the NRA and gun manufacturers realize that a shift in marketing may make sense.  Ten years from now, the American gun culture may look a lot more colorful.