Becoming an Employer of Choice 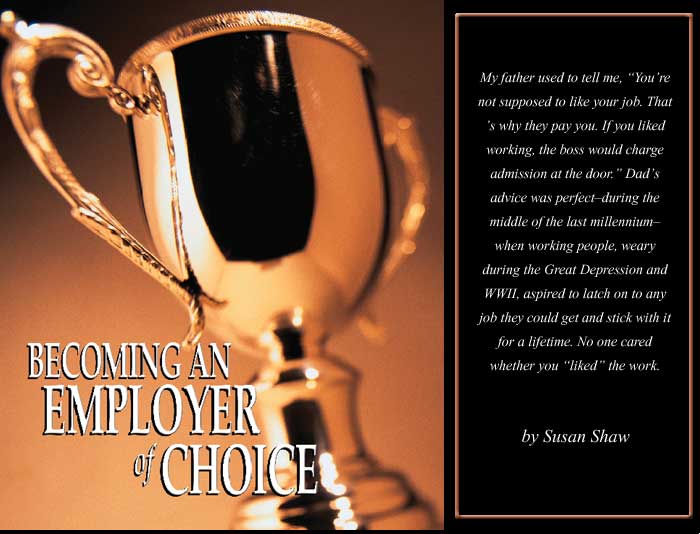 However, in the new millennium, workers will change jobs and move into entirely different industries and careers an average of nine times. A nuclear physicist might open a modeling school. A kindergarten teacher may become a stockbroker. Job hoppers are likely to be viewed as flexible and hungry for new challenges, rather than as flakes that can’t hold down steady work.

Today’s job force expects not only to like their work, they intend for employment to become a primary vehicle through which they find fulfillment. Top performers demand work that is rewarding, where their unique talents are recognized and encouraged. Frequently the dollar is not the main motivator.

Brilliant animators at Disney were known for their dedication to the team, despite the fact that they were not particularly well paid by industry standards. Working people today want to feel that their work contributes to noble goals and, on top of that, they want the flexibility to blend work and family without detracting from quality in either area.

It’s a big bill to fill. But top companies are ready and willing to create the workplace of the new millennium and beyond, a place where employees find fulfillment, and along the way, perform with the commitment to excellence that produces innovative, quality products and top dollars.

“Businesses want to be more profitable; that’s the bottom line,” says Joyce Gioia, a certified management consultant at The Herman Group and the co-author, along with Roger E. Herman, of How to Become an Employer of Choice. “Businesses want to increase their ability to attract top talent, and they know people don’t want to work in an organization that doesn’t do a good job; they want to work in a place where they will feel proud to work.”

When talented employees aren’t satisfied, they migrate elsewhere. The cost of that kind of turnover defies any accounting method, as many of the costs of a lost employee come not in dollars and cents but are counted in intangibles like time, stress, morale and missed opportunity. When a top employee leaves for greener pastures, executives and administrators burn up time interviewing new employees, orienting them, and inputting them into the system.

Meanwhile, others may have to work overtime to make up for lost productivity–increasing the stress on everyone–and continuity is lost while the new employee gets up to speed. “This only leads to absenteeism and even more expense,” Gioia says. Other intangible losses include the discomfort customers feel in dealing with a new person, and loss of confidence in the entire company as they wonder why their favorite rep jumped ship. As morale suffers, other employees may start migrating to greener pastures as well.

So what are businesses doing to increase employee retention? While “excellence” was the buzzword of the 80’s, whether companies achieved excellence or not, “employer of choice” is the current up and coming descriptor. Employers of choice attract, optimize and hold top talent for long periods.

“Those organizations which do earn the right to be described as employers of choice will enjoy a higher level of performance, greater workforce stability and a level of continuity that assures preservation of the knowledge base, customer loyalty, employee satisfaction, and stronger profits,” write Herman and Gioia. Workers, employees and contractors will tend to choose these companies over others when presented with a variety of choices.

According to Herman and Gioia, the term “employer of choice” represents a new design of corporate culture. “It means that people will choose to work for you, to dedicate themselves to your success, and will choose to stay with you, even when they are being courted by recruiters from other employers,” they say.

What is the main focus of an employer of choice? “They have an employee-centered environment,” Gioia says. “That’s an all encompassing statement to make, but these companies recognize that the most important players in the whole picture are their employees, and if they can keep the employees happy, the employees are going to make clients and customers happy.”

Herman and Gioia encourage companies who intend to self-designate as employers of choice to make a sincere commitment to honesty about the company’s history, status and goals. “Misleading or false information will be discovered eventually, and valued employees might quit,” they advise. “You have to walk your talk,” Gioia says.

How to Become an Employer of Choice, nominated for business book of the year in 2001, is packed with inspiring ideas and concrete examples of easy to implement strategies for employers who want to become sought after. In some cases, companies who make a sincere effort to provide golden opportunities rather than “golden handcuffs” will find that they have waiting lists of highly qualified people who want to work for them.

Herman and Gioia recommend that employers focus in on the following areas:

A McKinsey & Co. study of 77 large firms in the U.S. revealed the factors influencing business leaders’ choices in selecting a company. “Values and culture,” were the most highly prized qualities, along with freedom, autonomy and exciting challenges. “Acceptable pace and stress” was ranked lowest. Clearly, motivated people, when given plenty of autonomy, are willing to work hard, even in a challenging environment. A 1999 study found that employee loyalty increases along with a company’s ethical standards. Employers need to establish and enforce high standards, build a team atmosphere, and encourage open and honest communication.

Barking orders over the intercom behind closed mahogany doors is a leadership style that is long gone. Today’s enlightened leaders know that their own attitudes, values and visions can inspire or destroy a company culture. “Enlightened leaders are future-oriented,” say Herman and Gioia. They look as far ahead to the future as possible, setting the pace for the company and remaining open to new ways of thinking and doing business. Enlightened leaders communicate their vision to every employee, and involve every employee in a continuous dialogue that keeps them highly tuned to the needs of people, changes in the business environment, and especially great ideas created by the dedicated individuals that work for them.

Employers of choice recognize that people are their most important resource. They also recognize that they are responsible for more than the individual who works for them; they are also willing to meet the needs of their employee’s extended family, including children and aging parents. Policies that promote work-life balance are essential. Flex-time, job sharing, family leave, on-site child care, wellness programs, fitness gyms, telecommuting, van pools and even the ability to do personal laundry and receive medical care at work are becoming not just perks, but standards.

Janice Jones, (not her real name), fresh out of college and eager to succeed, landed her first job at a Fortune 100 company with ESOP benefits that could have made her rich. However, although the company had promised challenge and had dazzling enlightened policies–on paper–corporate political players interested only in “headcount” pigeonholed her in a position with little responsibility. When she inquired about advancement, she was told she had two options: move your California lifestyle to the frozen Midwest, or become the office manager, a lackluster position occupied by a woman who read novels at her desk. Eventually, on her breaks, Jones ended up ducking into the office across the hall–a small nonprofit organization–to do the writing and public relations work that was her passion. When she gave notice, management was stunned. They believed that no one would want to give up the opportunity to work with their illustrious company.

However, motivated people deprived of growth opportunities will leave any company, no matter how prestigious. Herman and Gioia recommend that managers unite each employee with a mentor who can help them chart a course, and that each employee develop an individual growth plan. The plan should be updated continuously, and opportunities for additional training and higher education should be available and accessible.

How do job seekers get a clear picture of a company’s culture? A little sleuthing and an “intercept” interview are warranted. “Talk to other employees. If you can’t do that in the workplace, meet people outside the office, even by the elevator if you have to. Ask them how they like working there and how they like their leaders.”

What if a valuable employee does leave? “We highly recommend that organizations not burn their bridges,” Gioia says. “They should be open to what we call ‘boomeranging’ employees, by keeping in touch with people who leave and keeping the doors open. If you are sorry that they left then you’d probably be pleased to have them back.”

The Herman Group predicts that businesses will be challenged like never before when the millennials arrive in the workplace. “They are a whole generation with ADD,” Gioia says. “They’ve been on computers and video games their whole lives and are used to things changing every nanosecond. We’ve got to find a way to engage them.”