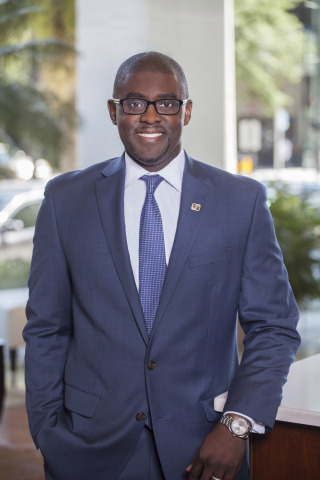 “I am excited to see Brian recognized with this well-deserved honor. Brian is an inspirational leader with both strong character and outstanding business results,” said Greg Carmichael, chairman, president and CEO, Fifth Third. “His career exemplifies the Fifth Third Bank values and he is a role model for so many people in our organization.”

“I am proud to be part of such a distinguished group of respected and accomplished business and community leaders from across the country,” Lamb said. “This list represents 100 great examples of individuals who are both successful in corporate America and who are making a positive difference in their respective communities,” he said.

Lamb previously served as chief corporate responsibility and reputation officer, where he led the comprehensive strategic framework of the Bank’s civic commitments and reputation management, including the execution of the Bank’s five-year, $30 billion community commitment. Prior to that role, he served as regional president of Fifth Third Bank (North Florida), where he was responsible for the growth and strategic alignment of the commercial, wealth and asset management and consumer businesses.

In addition to his duties as the head of wealth and asset management, Lamb also serves as chairman for the University of South Florida board of trustees. Previously, he was a member of the Florida Council of 100 Board of Directors and the United Way Suncoast Campaign Cabinet. He also served as chairman of the audit committee for the Enterprise Florida Board of Directors and chairman of the Tampa Bay Partnership. He also serves as a board member of the Urban League of Southwestern Ohio.

Fifth Third Bancorp is a diversified financial services company headquartered in Cincinnati, Ohio. As of Dec. 31, 2017, the Company had $142 billion in assets and operated 1,154 full-service Banking Centers and 2,469 ATMs with Fifth Third branding in Ohio, Kentucky, Indiana, Michigan, Illinois, Florida, Tennessee, West Virginia, Georgia and North Carolina. In total, Fifth Third provides its customers with access to more than 54,000 fee-free ATMs across the United States. Fifth Third operates four main businesses: Commercial Banking, Branch Banking, Consumer Lending and Wealth & Asset Management. Fifth Third is among the largest money managers in the Midwest and, as of Dec. 31, 2017, had $362 billion in assets under care, of which it managed $37 billion for individuals, corporations and not-for-profit organizations through its Trust and Registered Investment Advisory businesses. Investor information and press releases can be viewed at www.53.com. Fifth Third’s common stock is traded on the Nasdaq® Global Select Market under the symbol “FITB.” Fifth Third Bank was established in 1858. Member FDIC.

Savoy Magazine is a national publication covering the power, substance and style of African American lifestyle. From entertainment to sports, business to politics, design to style, Savoy is a cultural catalyst for the African-American community that showcases and drives positive dialogue on and about Black culture. Savoy is published quarterly and distributed via subscriptions and newsstands worldwide.