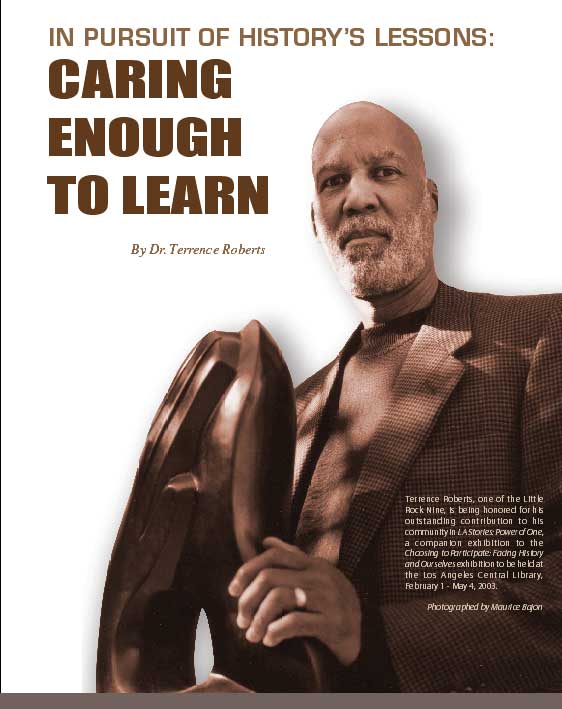 In 1997, the City of Little Rock hosted a commemoration of the 40th anniversary of the integration of Central High School. Many of the locals voiced discontent and suggested it was inappropriate to revisit such a chaotic period in our nation’s history. They said that good, righteous people would be embarrassed because of youthful indiscretions, that old photos would show them at their worst. Further, they contended, it was probably best to let sleeping dogs lie; it would do little good for anybody to stir up those old memories. I wondered then, as I wonder now, about the wisdom of such advice. If, in fact, the people who acted out their racist agendas in 1957 had made significant changes in their attitudes toward different others, then why not demonstrate for all of us how that had been accomplished.

What a great opportunity to show the present generation that positive change could be made, and with some effort, old ideas discarded in favor of new ways of thinking. It was my thought that the review of our shared history would provide data for the dialogue we so desperately need to have. We need to know how the past informs and shapes the present; we need to understand the dynamics of historical happenstance and how the future is but an extension of that which precedes it.

With the Choosing to Participate initiative, Facing History and Ourselves seeks to promote the kind of dialogue I have always imagined. For more than 27 years, this educational organization has engaged students of diverse backgrounds in an examination of racism, prejudice, and anti-Semitism in order to promote the development of a more humane and informed citizenry. By studying the historical development and lessons of the Holocaust and other examples of collective violence, students make the essential connection between history and the moral choices they confront in their own lives.

Choosing to Participate: Facing History and Ourselves, a multimedia traveling exhibit coming to the Los Angeles Public Library’s Central Library February 1 – May 4, 2003 extends the conversations that happen in a Facing History classroom to the community at large. Choosing to Participate asks visitors to consider the meaning of participation in a democracy, and considers the role each of has in promoting and sustaining a more just and equitable society. It highlights three stories from our nation’s recent past where individuals, communities and our nation had choices to make in response to hatred and bigotry. The 1957 integration of Central High School in Little Rock, Arkansas by nine African American students, including myself, is one of the stories the exhibit examines.

One regret I have from my experience as one of the Little Rock Nine is that I did not have the opportunity to sit down with my tormentors and talk about what was happening to us. They seemed solely interested in either my hasty departure or my immediate demise–whichever came first. They were not available for any kind of humane interaction. The Choosing to Participate exhibition is designed to encourage us to find ways to connect with each other. Only when we care enough to face the painful reality of our past and to learn from it will we be able to figure out how to live together without the irrational lines of separation that confuse and confound us.

There are times when I think most Americans are addicted to mythology and will not hesitate to elevate some of the myths to high-order levels of truth. For example, many of us cling to the idea of race as a viable, scientific entity, or some believe that there is such a thing as equality of opportunity, or even, that we live in a meritocracy where individuals get what they get because of merit. Frankly, I am frightened by those who hold these myths to be self-evident truths. My fear is based on the notion that real dialogue can occur only when there is basic agreement on the foundational principles. How can I truly communicate with someone who believes in fantasy?

One very apropos example of this way of thinking is affirmative action. Most people would probably agree that affirmative action is a fairly recent invention designed to provide advantages to underserved populations. Nothing could be farther from the truth. We have in this country one of the most well-developed, highly effective programs of affirmative action ever devised by humankind, and it has been around since the inception of the country. The founding fathers saw merit in such a program and they deemed white males to be its most obvious beneficiaries. We have but to look around us to see the long-term, highly positive outcomes of this program.

It is time to confront the mythology, to bring light to the hidden corners, and to set this society on a course leading to the realization of its true potential. The hard work of learning how to do this includes making changes in the structure of our mental maps, those devices we use to make sense out of the universe. Among other things we must redefine, reconstruct, reevaluate, and rethink our approach to those who are different from us.

The Choosing to Participate project will offer much in this direction. The exhibition will challenge viewers to ask hard questions about their relationships to people who differ from them, and hopefully, inspire them to discover or create new and better ways of being together with different others.

ABOUT DR. ROBERTS:
Dr. Terrence Roberts was one of the Little Rock Nine, a brave group of youngsters who integrated Central High School in 1957. He went on to earn a Ph.D. in psychology and now resides in Los Angeles. In addition to teaching psychology at Antioch University, he is a successful clinical psychologist as well as public speaker and consultant on diversity and race relations. Dr. Roberts is being honored for his outstanding contribution to his community in LA Stories: Power of One, a companion exhibit to the Choosing to Participate: Facing History and Ourselves exhibition.