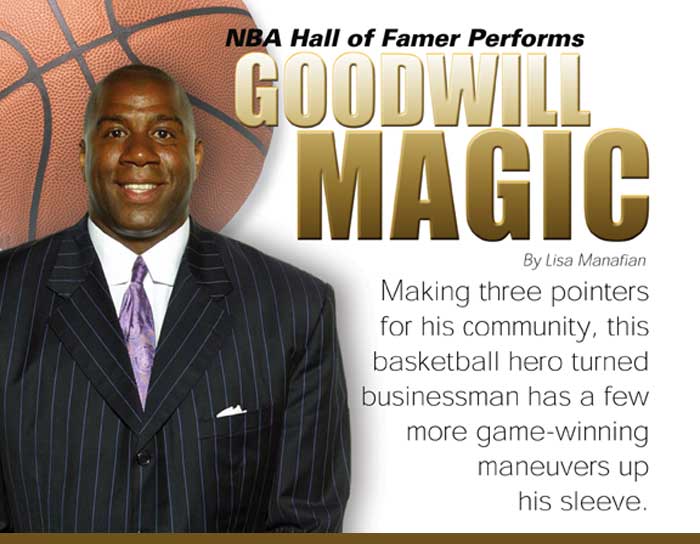 Earvin “Magic” Johnson, is a good will hunter. He founded the Magic Johnson Foundation in 1991 to raise both money and awareness for HIV/AIDS.

Since then, this basketball wonder has turned an altruistic enterprise into a multimillion dollar network, which has allowed him to expand his mission from raising awareness on health issues, to supporting the educational and social needs of inner-city youth. By providing students with scholarships, underserved communities with computers, and nonprofit organizations with financial support to stabilize urban areas, Magic has become a staple supplier of good will.

This year the Foundation celebrated its 10th anniversary at the annual event, A Midsummer Night’s Magic. The proceeds of the weeklong gala go to sponsor the Taylor Michaels Scholarship Fund, which was established for college bound inner-city students. With savoir-faire for fundraising and networking, Johnson is utilizing his integral relationships with corporate America and traditionally Black organizations. Wielding his stardom at the dinner party, Magic entreated the crowd of businessmen and women not only to sponsor more students financially, but also to “give them jobs and internships, so they have somewhere to go after college.”

The Foundation has made a steadfast commitment to improve the lives of young people nationwide, and believes “that as long as children are given the tools needed to succeed, they can have a positive future.” Magic and his wife Cookie have embraced all 103 scholars as their own, creating an extended family for those students who face the challenges of college alone. Johnson told the crowd, “I’ve been blessed by God to have all these angels in my life. These are young men and women who know what they want out of life and know how to get it. They know a good education will open doors for them, and they understand that in return for their scholarships they will have to give back in some way.”

Taylor Michaels was the Chief Operations Officer of Magic Johnson Enterprises at the time of her passing. She is spoken of as empowering woman who was a strong advocate for children–a woman who enabled inner-city youth to envision “opportunity and not obstacles.” Her life’s work was spent mentoring young people striving for a higher education, and in honor of her legacy, the Magic Johnson Foundation designed a scholarship program to carry on her work.

This year over one hundred students will receive full financial support for their college tuition. Unlike many scholarships or grant money, the Foundation makes the commitment to support its scholars through all four years of college. Students accepted into the program must exemplify a strong potential for academic achievement, in addition to being faced with socioeconomic conditions that would prevent them from reaching their full potential. Beyond financial assistance the program includes mentoring and internship components.

Students are paired with mentors from a vast volunteer pool of dedicated professionals who provide guidance and support throughout the program. In addition, students have the opportunity to intern with MJF partnership corporations, as well as within one of the divisions of Magic Johnson Enterprises. This includes interning in the fields of entertainment management, concert promotion, commercial and retail development, nonprofit funding and music.

This year Hewlett Packard is donating a laptop computer and a color printer to each of the scholarship recipients. “Computers are just as necessary as books,” said Art Price, manager of the HP Multicultural Marketing Program, “and we wanted to make sure every scholar has a computer and printer.” Price further addressed the scholars by saying, “This is not a gift; it is not a donation; it is not a philanthropic anything–I’m a businessperson, and this is an investment.”

Magic encouraged the scholars to make good use of this invaluable opportunity. With all of their finances taken care of, he said, “Stick in there; all you have to do is go to class, study and make sure you get good grades.”

Three of the Taylor Michaels Scholarship recipients described their experiences with the Magic Johnson Foundation to The Black Perspective. The following are interviews with a few very gifted, bright and industrious young scholarship winners.

Jaqueena is a pre-med student in her senior year of college. She will be graduating in May 2003, and during this year she will be working on her honors thesis. She found out about the Taylor Michaels Scholarship Fund through friends and family, and filled out an application. Jaqueena had her doubts, but she recalls, “I went in for an interview, and the next thing you know, I was accepted to this wonderful program.”

Beyond the financial support, Jaqueena articulated how the scholarship has offered her so many great opportunities. “When I entered the program I was set up with a mentor who worked with the Foundation. My mentor has always kept me on track making sure everything is okay, and it has been so great having her support.” Over the summer, Jaqueena attended a UCLA premedical prep program, and she says, “It’s given me a lot of awareness and exposure to the medical field. We have leadership conferences with guest speakers who inform us about the different fields of medicine.” Throughout her years with the foundation she has attended workshops and life-skills classes. “It is so much more than financial support,” she adamantly exclaims, “It’s truly a family here, and for anything we need, they’re always there for us.

Her voice becomes excited with reverence when she describes “Big Daddy Earve,” as all scholars call him. She says, “I love running into him, he’s so genuinely sweet, and he always says, ‘Hello Arizona how are you.’” Jaqueena is indisputably mesmerized by “Daddy Earve’s” ability to remember all of the scholars, and details about each of their lives. She says, “He knows what we’re doing and he’s always interested. He heard about my participation in the UCLA medical program, and asked me how it was going.” Jaqueena feels so fortunate that she has attended college under the nurturing care of the Foundation, and with provisions that have ensured her success.

Lauren will be attending her first year of college this fall, and with help from her sister, who is a fellow scholarship recipient, she was awarded a full scholarship to attend college. She said, “my sister applied for the scholarship and she got it, so she pushed me to apply for it and I did.”

All of her young adult life, Lauren has “been in love with music and dancing.” She has plans to intern with Los Angeles radio station 100.3 The Beat during college, and would eventually like to work in music and radio production. However, her goals weren’t always so certain. She remembers her early years of high school as a time to “slack off during class,” but she says, “then I realized if I wanted to get the best, I’ve got to give my best. So I did, and in my junior year of high school I really labored at my studies.” With an improved GPA, and hard work under her belt, Lauren grew excited at her improved chances of earning a scholarship.

Towards the end of high school, Lauren recalled times when her sister would come home from college and share her experiences with the Magic Johnson Foundation. “She would tell me about how much fun they have, and how all the recipients interact, and what great people they are.” Lauren says, “I wanted to become a part of their family because I’m a gregarious type of person; I love interacting, and here we get loved. It’s a real family.”

Not once since her arrival, has Lauren felt like an unwelcome newcomer. Of her peers, she says, “They include everyone,” and “that’s what I love about it.” She was even more thrilled when she met Magic for the first time. “He introduced himself to me, since I’m a first time recipient, and asked me what school I was attending and made sure to learn my name.” Wearing a huge smile on her face, Lauren concluded by saying, “What Magic’s doing for us is incredible, he’s giving us so much.”

With an animated expression, Karl described how the Taylor Michaels Scholarship fell into his lap one day. He remembers, “I was meeting with a guidance counselor and she just happened to step out of the room. As I was waiting, I noticed a big binder full of scholarships lying next to me, and I began flipping through to see which ones I could apply for. When I came across one affiliated with Magic Johnson, it left a lasting impression, and so I thought I’d try for it.”

His family always promoted the importance of learning. As a young boy Karl moved from Cleveland to Baltimore because he says, “the school system in Maryland was ranked number one in the nation, and my mother really cared about our education.” When Karl was in high school his mother grew deathly ill, and due to her unfortunate circumstances Karl’s plans to finish school were temporarily put on hold. He recalls, “I needed to drop out of school for two years to help take care of my mother, and by the age of 16, I had a full time job to help pay for her medication.” His brother and sister dropped out of college as well, and together they were able to handle the tragedy of their mother and survive the increasing piles of medical bills. He readily admits, “Going through that is hard on a 16 year old.”

“I realized that I needed to talk with my mother after the period of two years about enrolling in school again,” Karl says. “I still had a goal to achieve, which was to receive my high school diploma.” Karl was able to re-enroll, and without reservation he says, “I worked hard and I excelled in the class room. I got my high school diploma, earned a Magic Johnson Scholarship, and now I’m doing very well at Ohio University.”

With the door of opportunity opened wide, Karl is preparing to attend medical school. He says, “One thing that really inspired me to become a doctor was my mother’s untimely illness.” He is so grateful to the Foundation for providing him with the chance to participate in career enhancing activities. “Last year I participated in the UCLA School of Medicine, premedical enrichment program because the Magic Johnson Foundation has a partnership with them.” He believes that the eight-week intensive premedical program gave him a lot of insight into the medical profession and will ultimately give him a competitive edge in the field. “I have received so many things from the Foundation,” he says, “but more than anything they have been a family.”