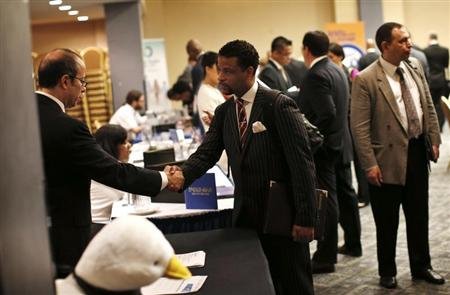 Initial claims for state jobless aid dropped 27,000 to a seasonally adjusted 341,000, the Labor Department said on Thursday. The prior week’s claims figure was revised to show 2,000 more applications were received than previously reported.

Last week’s drop in claims exceeded economists’ expectations for only a 6,000 decline and pushed first-time filings down to the lower end of their range for this year.

“It does seem as if claims are trending down a bit. We think payroll growth will pick up this year and this sort of gradual downtrend in claims seems consistent with that,” said Sam Coffin, an economist at UBS in New York.

But some economists said a blizzard that slammed the East Coast late last week and difficulties smoothing out the data for seasonal fluctuations could have artificially depressed claims.

While they were encouraged by the decline, they urged caution against reading too much into the data.

“Claims may not be giving a reliable signal about the labor market,” said Daniel Silver, an economist at JPMorgan in New York.

A Labor Department analyst said claims for Illinois and Connecticut, one of the states hardest hit by the snowstorm, had been estimated. He said given that most claims are filed online, the blizzard appeared to have little effect on the broader data.

U.S. financial market were little moved by the data as investors focused on news the euro zone economy slipped deeper into recession in the fourth quarter. Stocks on Wall Street were little changed, while the dollar and U.S. Treasury debt prices rose.

The data offered more evidence that U.S. companies are no longer aggressively laying off workers. However, they still appear to be in no hurry to step-up hiring against the backdrop of still lackluster demand.

The economy has struggled to grow much more than 2 percent since the 2007-09 recession ended, and the jobless rate rose 0.1 percentage point to 7.9 percent in January.

High unemployment prompted the Federal Reserve last year to launch an open-ended bond buying program that it said it would keep up until it saw a substantial improvement in the outlook for the labor market.

It also has committed to hold interest rates near zero until unemployment reaches 6.5 percent, provided inflation does not threaten to push over 2.5 percent.

Job gains averaged 181,000 per month in 2012, far less than the at least 250,000 that economists say is needed to significantly reduce the ranks of unemployed.

“The rate of job losses has slowed in early 2013, which is consistent with a modest pickup in net job creation,” said John Ryding, chief economist at RDQ Economics in New York.

“Our projection for 2013 is that the average pace of job growth will be around 175,000 per month and we judge this drop in claims to be broadly consistent with this forecast.”

Last week, the four-week moving average for new claims, a better measure of labor market trends, rose 1,500 to 352,500. The average had approached a five-year low in the prior week.

The number of people still receiving benefits under regular state programs after an initial week of aid dropped 130,000 to 3.11 million in the week ended February 2.

That was the lowest level since July 2008 and could be a function of people either securing jobs or simply exhausting their benefits. So-called continuing claims had hovered around 3.2 million since late November.