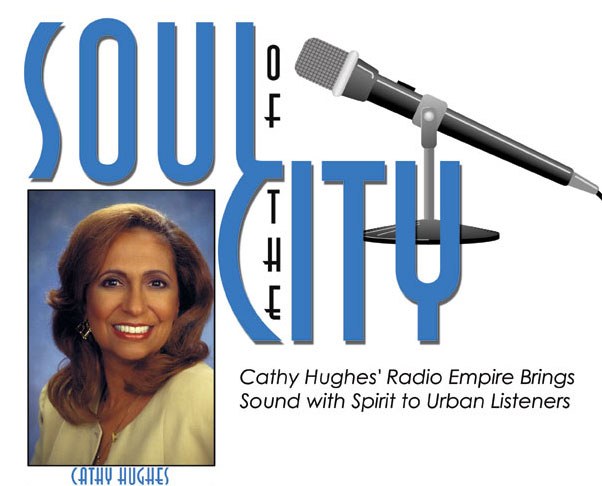 Everyone loves a hero. We love old fashioned rags to riches stories about starting at the bottom and zooming straight to the top. Cathy Hughes’ story is one of those. In the world of radio and business, she has built an empire and attained status of truly heroic proportions. A college drop-out who became pregnant at 16, Hughes gained 82 pounds and suffered from depression. However, her son, Alfred, became her inspiration and her motivation. Unstoppable, Hughes pushed forward, saying a prayer every morning, and behind the microphone—raising hell. She has slept nights in a sleeping bag on the station’s floor and played her own LPs brought from home to fill air time, working in every aspect of radio from sales to talk show host.

Today, Hughes and her son, Alfred Liggins, the president and CEO, work side by side running Radio One, Inc., the largest African American owned and operated broadcast-company in the nation. It is the first African American company in radio history to dominate several major markets simultaneously, and the first woman-owned radio station to rank #1 in any major market. In 1995, Radio One purchased WKYS in Washington, D.C. for $40 million — the largest transaction between two Black companies in broadcasting history.

In May of 1999, Hughes and Liggins took their company public. Hughes made history again by becoming the first African American woman with a company on the stock exchange. Radio One’s value is currently in excess of $2 billion dollars. In 2000, Black Enterprise named Radio One, “Company of the Year”, Fortune rated it one of the “100 Best Companies to Work For”, and Radio One was inducted into the Maryland Business Hall of Fame.

In August 2000, Hughes and Radio One purchased KBBT “The Beat” in Los Angeles for $430 million and put actor and comedian Steve Harvey at the helm of the morning slot. Together, they are determined to make The Beat reach number one in the L.A. market. Hughes considers The Beat to be a pet project, a veritable Hope diamond in her portfolio of radio ventures.

The decision to bring on Steve Harvey was carefully researched. Liggins studied the L.A. market and determined that Harvey was one of the few who was capable of turning the urban radio market around. Urban audiences, and Black audiences are unique and offer particular challenges. Hughes says that average incomes may be relatively low, but that advertisers are realizing that urban listeners are consumers with spending power that is a worthwhile target. Additionally, music is a meaningful part of daily life for listeners, an art form that unifies and inspires communities. To keep listeners loyal, urban stations must keep their ear to the ground and build meaningful connections with the audience they serve.

Ratings have soared since Harvey took the mike, and Harvey and Hughes make a formidable team. Their philosophy of working hard to empower Blacks in business and in life, stopping only to ask for guidance from God, is one that works.

Radio One is recognized for its intense community involvement—the trademark of Cathy Hughes. Her pioneering work has led Essence to name her one of “100 Who Have Changed the World”, and one of the “100 Most Powerful and Influential Persons” by both Regardies and Washingtonian. Radio Ink continues to list her as one of the “20 Most Influential Women in Radio” and Ebony cites her as one of the “10 Most Powerful Women in Black America”.

The Washington Post describes Hughes as “the voice of the Black community”. Her stations now reach over 18 million Black listeners daily. She is committed to keeping Black broadcast ownership alive and her goal of building a broadcast empire with a solid foundation in the African American community has come to fruition. The result has been an increase in revenue and opportunities for minorities and women. Hughes currently has more than 1,500 Black broadcasters on staff at Radio One, Inc.

Hughes’ dedication to minority communities, entrepreneurial spirit, and mentoring of women are manifested in every aspect of her work and life. As such, she was honored with the Lifetime Achievement Award from the Washington Area Broadcasters Association and The Seventh Congressional District Humanitarian Award. She has been granted the Ron Brown Business of the Year Award by the Department of Commerce, the Baltimore NAACP’s Parren J. Mitchell Award, the Mayor’s Recognition Award, and the Everett C. Parker Award. In April 2001, she received the National Association of Broadcasters’ Distinguished Service Award.

Born in Omaha, Nebraska, she moved to Washington, D.C. in 1971 and became a lecturer in the newly established School of Communications at Howard University. She entered radio in 1973 as general sales manager at WHUR, Howard University Radio, increasing station revenue from $250,000 to $3 million in her first year. In 1975, Hughes became the first female vice president and general manager of a station in the nation’s capital and created the format known as the “Quiet Storm” — the most listened to nighttime radio format, heard in over 50 markets nationally. Purchasing her first station in 1980, WOL-AM (D.C.), Cathy Hughes pioneered yet another innovative format — “24 hour Talk from a Black Perspective.” With the theme, “Information is Power,” WOL is the most listened to talk radio in the nation’s capital.

Hughes currently serves on the boards of The Baltimore Development Corporation, The Rhythm & Blues Foundation, The Broadcasters Foundation, The National Urban League, and the Piney Woods School in Mississippi founded by her grandfather in 1909.

Cathy Hughes founded Radio One in Washington, D.C. Though Radio One, Inc. is now a public company, for Cathy Hughes, the foundation of Radio One is still based on the spirit of a family that strives to serve as the heart of community, as well as the pulse of urban radio.