Stand and Prosper: Private Black Colleges and their Students 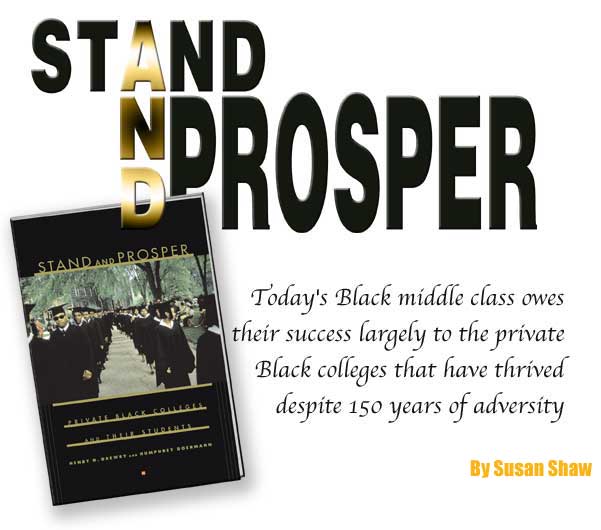 Scattered across the deep south from Texas to Florida, a small group of distinctive institutions of higher learning have survived and prospered since the middle of the last century. Their stories tell of astounding resilience in the face of the adversity generated by this country’s legacy of slavery and segregation. Today, America’s private Black colleges stand as monuments to Black Americans’ struggle to secure access to higher education and to the development of a Black middle class.

“The historically Black colleges represent a remarkable story of survival against all odds. They produced much of the Black civic leadership in this country, contributed greatly to the formation of a significant Black middle class, and have long provided pathways otherwise unavailable to untold numbers of Black Americans… They play an important part in the diversity of America’s higher education, a source of this country’s strength,” write Henry N. Drewry and Humphrey Doermann, the authors of Stand and Prosper: Private Black Colleges and Their Students.

The story of America’s private Black colleges is a compelling chronicle that highlights the paradox of democratic ideals and the reality of a system of racial caste, dynamics clearly visible within the history of higher education. “With the emphasis that the democratic system has placed on education, it is hard to imagine any ethnic group prospering without considerable higher education. But, there were conscious efforts to deny even basic education to Blacks throughout most of the history of this country,” Drewry says.

Stand and Prosper focuses on the history and present condition of private Black colleges. As Drewry says, “They were, in their early years, free from political control and much more able than public Black institutions to focus on the academic quality of their programs.”

Over the years private Black colleges developed unique strengths and have carried on an important mission, according to the Carnegie Commission of Higher Education. In providing services to students whose pre–college education was of poor quality, these institutions have developed special abilities to meet student needs. Additionally, they serve as custodians for the archives of Black Americans, as centers for the study of the Black man’s problems and achievements, and as interpreters of Black America’s aspirations and experience as depicted in literature and art.

A Chronicle of Adversity

The majority of private Black colleges began in areas of the South where the controlling majority expressed opposition to and, before the Civil War, enacted laws against formal education for Blacks, among whom less than five percent were literate. Through their inspirational efforts following the war, anti–slavery whites and ex–slaves worked to convert the constitutional abolition of slavery into the reality of personal freedom and equality including educational opportunity.

Private Black colleges confronted an extraordinary array of obstacles including a lack of financial resources, a dearth of well–trained teachers, poor facilities, local hostility, and students who were largely indigent and unevenly educated. They weathered the period of the Jim Crow laws in the South, when on the average, one Black American was lynched every four days for nearly three decades. Yet despite extraordinary adversity, the Black colleges multiplied, serving ever-larger numbers of students.

“Up until the 1950s throughout the South, the amount of money spent per student in segregated schools was sometimes ten times more for white students, and the same pattern existed in higher education. The resulting inequality of programs and funding provided in segregated schools benefited whites, at the expense of Blacks. If pre-college education is not well established, the colleges that serve such students are at a disadvantage,” Drewry says.

The pattern of lesser opportunity in education for Blacks is one that has continued to the present day. A class action lawsuit initiated in 1975 demonstrated that Mississippi State public colleges and universities with largely Black enrollments were less well funded than those at the state’s historically white institutions because of state-sanctioned racial discrimination. A tentative agreement reached in April 2001 provides for $503 million to improve academic programs, provide endowments, increase financial aid to students, and fund new projects such as an engineering school at Jackson State and a business school at Alcorn State. The U.S. Supreme Court had ruled in 1992 that the state’s higher education system was separate and unequal.

Although slaves were liberated following the Civil War, mandatory segregation dictated by federal courts barred Black students from opportunity for another century. The tide turned in 1954, with the supreme court decision of Brown v. Board of Education, when Chief Justice Earl Warren delivered the unanimous decision that the previously mandated “separate but equal” doctrine of segregation “deprived equal protection of law guaranteed by the Fourteenth Amendment.”

By the mid–1960s, the changes that resulted from implementation of the Brown decision were affecting many aspects of life at private four–year Black colleges. A new sense of hope among Black students and the possibilities of a future less influenced by racial prejudice made the value of investing time and money in higher education indisputable. Black Americans entered traditionally white colleges for the first time, but enrollments at private Black colleges continued to increase, doubling by 1975.

Talladega College in Alabama, Drewry’s alma mater, is one of the smallest private Black colleges. Its history is representative of all institutions of that genre. Talladega was founded when William Savery and Thomas Tarrant, both former slaves, met in 1865 with a group of freedmen in Mobile, Alabama, where they joined others in signing the following resolution: “We regard the education of our children and youth as vital to the preservation of our liberties, and true religion as the foundation of all real virtue, and shall use our utmost endeavors to promote these blessings in our common country.”

With this as their pledge, Savery and Tarrant, found support among local Blacks. Salvaged lumber was used to build a one–room schoolhouse, and for the first time, the children of former slaves began their educations. Today Talladega College serves 650 students for whom the most popular majors are computer science, business administration and biology. An impressive number of its past graduates have moved on to Ph.D., medical and law programs at prestigious universities. Tuition at Talladega is just under $6,000 annually.

Drewry’s mother worked as a public school teacher in Alabama and his father was a professor of education and the principal of the Practice High School that fed its best graduates into Talladega College, founded in 1857. Drewry attended Talladega as an undergraduate, an experience that he thinks of fondly, saying, “It served me very well.” As a student, he benefited from the strong sense of community on campus. “I knew everyone,” he says.

Why Choose a Black College?

Drewry and Doermann say that Black colleges today provide a welcoming environment where Black Americans can develop their skills and abilities and learn to better understand themselves and the society in which we live. Students can benefit in many additional ways from an all Black educational setting of their choice: greater self- esteem, higher faculty expectations for their success, a greater number of positive Black role models on campus, and a social climate that instills a sense of belonging are just a few of the unique elements that make the all Black campus uniquely rewarding.

“Some kids will fare well regardless of the college they choose,” Drewry says. However, for some, the smaller campuses of private Black colleges offer a needed sense of community and inspiration by way of the exemplary record of success that produced many of the Black professionals and civic leaders. When U.S. colleges and universities are ranked in order of the number of their Black bachelor–degree recipients who went on to earn doctorates between 1991 and 1995, 9 of the top 10 producers in the U.S. are historically Black institutions.

Drewry recalls that Black students he came to know at Princeton University typically came from academically strong secondary schools and had good credentials. However, “Some felt that they were looked at as an outsider.” He remembers talks with one student in particular. The student’s parents, part of the first generation of Black middle–class wage earners, had income that made the student eligible only for very modest financial aid. The parents accepted the challenge of financing his Princeton education and made serious sacrifices to achieve their goal. The student described this as an exciting family decision and commitment, but was disappointed when several months into the term, his non–Black room mates remarked on how lucky he and other Black students were to get full financial aid. The remark, born of stereotyping and misunderstanding, made him less comfortable in his relationships with those with whom he shared living space.

The Future of Private Black Colleges

The events of the last several decades–the civil rights movement, Black power, and Black consciousness–led some to wonder whether an unfortunate collateral effect of desegregation would render these historic colleges obsolete. In the new era of desegregation, Black colleges competed with other U.S. colleges, many with far more resources to attract students and faculty. However, “One hears few doubts today that these colleges are useful or that they will survive. Their record of accomplishment is so well established that voices expressing doubts about the continued need for them are rare indeed,” write Drewry and Doermann.

“If we reach a point where a majority in the country can be comfortable about our success in creating integrated society, more non–Black students will attend Black colleges,” Drewry says. Through their history these colleges have had some white students, beginning in their early days with the children of white faculty. Today, the majority of students at some public historically Black colleges–Alabama State and West Virginia State being two examples–are white.

The authors indicate that financial challenges remain for private Black colleges today even though some are sounder than they have been in the past. More money means better equipment and facilities, at a time where the costs of outfitting science labs and acquiring new technology are soaring. This puts the less strong private Black colleges at a disadvantage in attracting faculty and in providing services needed by students. “Additionally,” Drewry says, “we are still adjusting to influences remaining from a time when there were far fewer educational opportunities for Blacks. Because of this, some students require the understanding of and attention to their needs that private Black colleges have provided over the years.” It is hoped that the continued quality leadership and increased financial support can be found to help close this gap.

“The majority of today’s Black professionals, particularly scholars, doctors and lawyers, in their 50’s or older, earned their bachelor’s degrees at private Black colleges. Fisk and Xavier Universities and Morehouse, Spelman and Talladega Colleges are among the names that appear over and over in lists of institutions that sent significant numbers of graduates on to post baccalaureate study.

America’s private Black colleges are essential because, Drewry says, “For some they provide a place where students can develop their skills more thoroughly than in any other.” The globalization of the economy, the new era of information technology, and the challenges of finding continued financial support for private Black colleges create situations that some campuses will deal with better than others. However, these institutions already have an established track record of overcoming obstacles that were even more imposing. Drewry and Doermann write, “In 2020, it is reasonable to assume that, just as in 1896, 1915, 1954 and 1964, the private Black college will be a part of the American landscape.”