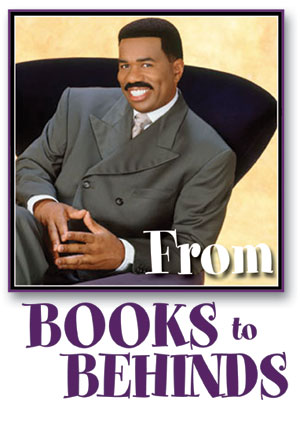 It’s 8:15 on a foggy Thursday morning in L.A., and Steve Harvey, the morning disc jockey on The Beat 100.3, is riled. His customary honey smooth Southern style drawl has turned to an evangelist’s bark, full of hell fire and brimstone. Harvey is furious. “We’ve been to the schools ourselves,” he rants, as he describes The Beat’s efforts to help L.A.’s inner city schools get needed resources. “We counted the books. Some kids don’t even have a book to take home. There’s a problem here.”

Steve Harvey is known as one of the most talented comedians working in Hollywood today. Last summer, he helped break box-office records starring in Spike Lee’s documentary film, “The Original Kings of Comedy,” and hosted the popular syndicated Saturday night series “It’s ShowTime at the Apollo” for seven years. Since September, Harvey has been redefining morning drive-time radio in Los Angeles with his hilarious wit and a warmth as down home as folks settin’ on a porch swing. In sync with The Beat’s owner, Radio One, Steve and his wife Mary use the voice of radio to amplify issues and connect with the Black community.

A native of Cleveland, Ohio, Harvey has performed stand-up comedy in clubs across the nation for a decade. Like any seasoned comedian, he draws on acute observations and experiences of day-to-day life that we all find humorous. Whether he’s pointing out that most brothers’ behinds don’t fit into a pair of Dockers, or threatening to give a mouthy policeman’s son a butt whoopin’, Steve’s comedy has a genuine, but morally inspired quality that endears and magnetizes listeners.

“The number one focus of his radio show is comedy,” program director Robert Scorpio says. “But Steve also realizes that as a voice of the radio and of the city, there’s a responsibility involved. He’s really trying to awaken people to problems, and he’s made a difference. He’s been a champion of community outreach since he’s been here.”

Harvey is considered a hot commodity at The Beat and the station has become Kathy Hughes’ pet project. His fearlessness when it comes to speaking his mind has boosted ratings. “What he’s saying is what he’s about,” Scorpio says. “That’s the biggest attraction—people can relate to him.”

Unlike shock jocks who purposefully provoke listeners, Harvey feels a keen sense of responsibility behind the microphone, and operates from the belief that he answers only to God. God would be pleased with Harvey’s efforts. When listeners brought it to his attention that books were lacking in some L.A. schools, Harvey dispatched members of

his team to meet directly with school principals. His ranting and raving on the air irked some school officials, who believe that Harvey’s blunt style bashes administrators and demoralizes school children. But, Jefferson High School principal Mrs. Virginia Preciado says there is always a need for books, and that dictionaries, which are not covered under the same state funds as text books were desperately needed in her classrooms.

Preciado received a check for $5,000 from the Steve and Mary Harvey Foundation, and is delighted. She says, “Mary Harvey actually came to the school and met with me regarding our needs. We pulled together a wish list of critical books, and much to our pleasure and surprise, they came through within a very short period of time.” Ten schools in all received checks for id=”mce_marker”5,000, and seven of the principals went to the station to receive their checks in person, on the air.

The local community was quick to hop on the book cause bandwagon. Funds were collected through the Steve and Mary Harvey Foundation provided by individuals and corporate sources like Burger King and McDonald’s. Two thirds of the sum delivered to school principals came by way of a matching fund from the Department of Water and Power. “The station was flooded with calls from people who wanted to help,” said The Beat’s account manager, Lillie Piloto.

Equality Magazines owners, Jeff Palmatier and Jeff Hillman, publishers of The Black Perspective and regular The Beat 100.3 isteners, heard Harvey on the air and were energized by his mission to get books to school kids. Palmatier jointed other notables including Eric Dickerson and Marcus Allen to demonstrate support at the First Annual Steve Harvey Golf Tournament. Equality Magazines also provided copies of the Tiger Woods edition of The Black Perspective in gift bags for each player. To enable people of lesser means to contribute, Savon Drug stores offers “Beat Water,” bottled water sold for a dollar a piece with half the proceeds going to Harvey’s Foundation.

Principal Preciado says, “The Beat continues to support and encourage our students to be in school on time on a regular basis. Harvey tries to motivate the kids to do the best they can. Kids really relate to him.” She says that Harvey has made a commitment to her school, and to others, to assist in whatever way they can

“The public response to Harvey’s style has been as quick and instant as I’ve ever seen,” Scorpio, veteran of the radio business. “He pulls at heartstrings. He makes people laugh. He offends them sometimes, but that’s part of the deal.”

Scorpio screens the music Harvey plays thoroughly, as the language in today’s music is, as he describes it, aggressive. “If they’re talking about killing everybody on the block, we need to do more than screen for the seven deadly words, we need to step in as responsible adults and decide whether we want to play it or not,” Scorpio says. Harvey makes it known which music he prefers, and frequently slips R & B classics onto the play list.

In April 2001, Harvey’s Hoodie Awards at the Aladdin Hotel in Las Vegas, gave individuals in the L.A. “hood” the opportunity to walk down a red carpet and receive a trophy and a plaque. Categories included The Best Fried Chicken Restaurant, The Best Nail Salon, and the Best Mexican Food. Harvey definitely touched a nerve, and filled the need for ordinary people to be recognized for their hard work. Seven thousand seats were sold almost instantly. “There was press, flashing light bulbs, people dressed to the nines,” Piloto says. “Everyone was decked out just like the Academy Awards.”

Denny’s Restaurant in Watts won the category of Best Breakfast Spot. When one of the restaurant’s waitresses appeared at the awards in a fur coat, Harvey chided her. “Damn, what kind of restaurant do you work at?” Business has boomed at Denny’s ever since. Tina Littleton, Denny’s general manager, took the Hoodie awards very seriously. “I’m doing more than ever now to try to live up to the award,” she says.

Harvey believes that his work at The Beat was given to him by God, and that God expects him to do right. “I ain’t nothing more than God lets me be,” he says.