When it comes to the importance of candidate skills and qualities, employers are looking for team players who can solve problems, organize their work, and communicate effectively, according to results of a new survey by the National Association of Colleges and Employers (NACE).

“Employers are seeking evidence of the soft skills needed to succeed in the workplace in the college students they’re recruiting,” says Marilyn Mackes, NACE’s executive director.

Employers responding to NACE’s Job Outlook 2014 survey rated “ability to work in a team structure,” “ability to make decisions and solve problems,” “ability to plan, organize, and prioritize work,” and “ability to verbally communicate with persons inside and outside the organization” as the most important candidate skills/qualities. (See Figure 1.) These are followed by candidates’ “ability to obtain and process information” and “ability to analyze quantitative data.”

NACE will release the Job Outlook 2014 report in the fall. 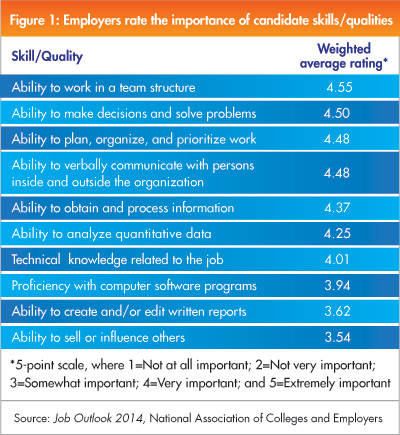 Since 1956, the National Association of Colleges and Employers (NACE) has been the leading source of information about the employment of college graduates. For more information, visit www.naceweb.org. NACE maintains a virtual press room for the media at www.naceweb.org/pressreleases/.